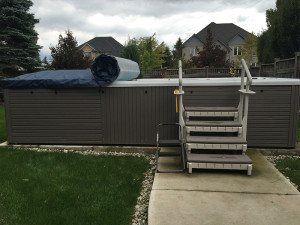 A swim spa in your home can be useful in many ways, but the energy costs of maintaining it can be a little high for some folks depending on differences in electricity prices across the country. So, how can one avoid large utility bills throughout the year, while still owning a swim spa?

Listed below are a few tips for conserving energy costs on your swim spa, based on information from the EnergyIdeas Clearinghouse.

Use a spa cover:

Use chemicals to insulate water:

Chemical covers generate a micro-thin layer atop the surface of your swim spa, which helps to trap some of the heat within the pool. The two main chemicals in these mixtures are Octadecanol and Propanediol, which when combined form an insoluble and insulating chemical layer that dissipates into air after some time on top of the water.

Add a timer to your swim spa:

A programmable timer on your spa will help to limit the number of hours that jets run inside the pool. You can program the jets to run before you plan to exercise or use the swim spa, or you may subsequently choose to workout during off-peak energy hours, which are usually early morning, mid-day, and late night. With either option you choose, or both, you could see noticeable changes in your energy bill.

Also, some cities, like Tucson, Arizona offer energy subscribers the opportunity at a lower electricity rate, simply based on when and how much you use your electricity. Their Time-Of-Use (TOU) pricing reduces the rate of electricity by 3 to 4 cents per kilowatt-hour. This timing system not only helps to save money but also protects the environment by using our resources more efficiently.

And one way to maintain a steady swim spa temperature is to purchase a swim spa cover, which can found at End 2 End Swim Spa Covers. Contact us today for details.

There are many reasons to construct a swim spa addition in your backyard. Whether it…

The Best Option for Triathletes

You’ve got the running down – loops around your neighborhood, always with the same pair…

Chances are, you have probably heard a few of these commonly known swimming myths. Sometimes…