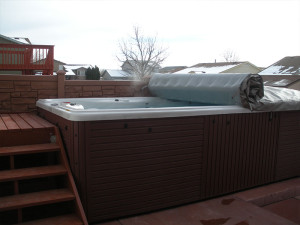 Swim Spas are self-contained units with a swim current at one end, functioning like a mini lap pool resembling a large hot tub in appearance. Swim spas are used for a variety of things from fitness to entertainment to relaxation and therapy. Swim spas have revolutionized the pools industry by providing safe, private swimming spaces.

The current is what makes a swim spa a swim spa. Typically currents are generated in one of the three ways: jet propulsion, paddlewheel or a propeller.

Jet propulsion currents are generated by forcing water through a number of jets. The range in speed and intensity, making swim spas perfect choice for everyone from beginners to training Olympic athletes. More advanced swim spas include features like changing the direction for a customized swimming or fitness experience.

Currents in the paddlewheel system are generated by a rotating paddlewheel at one end of the swim spa. The produced current is wide, deep and smooth, flowing in a layered, sheet-like fashion. Water is then circulated under the swim current to the paddlewheel to repeat.

Currents generated propeller are essentially turbulent-free. Propellers force water through grates in the spa wall, where it continues to a second grate on the opposite wall to keep the water circulating.

Aquatic exercise is beneficial and suitable for people of varying ages and fitness levels. The two greatest advantages of aquatic fitness are:

The weight of your body is supported by water’s buoyancy, in neck-height water you only weigh about ten percent of your land weight. In water, your body can endure higher intensity workout at a low impact with a lowered injury risk. Workouts performed in water impact the body less and are less likely to become sore.

Did you know that water is actually 12 times more resistant than air? In addition to water impact your body less, your muscles have to work harder to move through the water. Swim spas provide an environment for high-intensity exercises at a significantly lower impact. Your swim spa makes for a great environment to get fit.

Protect your swim spa with a cover when not in use to save money, lower energy bills and maintenance. Have a swim spa at home? End 2 End can get your swim spa covered.

Top 5 Reasons Why A Swim Spa Is A Great Choice

Swim spas are slowly taking over as a popular addition to homes across America. Hot…

5 Strokes You Can Practice In A Swim Spa

A swim spa is a good way to give yourself a place to practice swimming,…

The Eco-Friendly Benefits Of The Swim Spa

Whether you swim professionally or in your leisure, the swim spa is a wonderful addition…